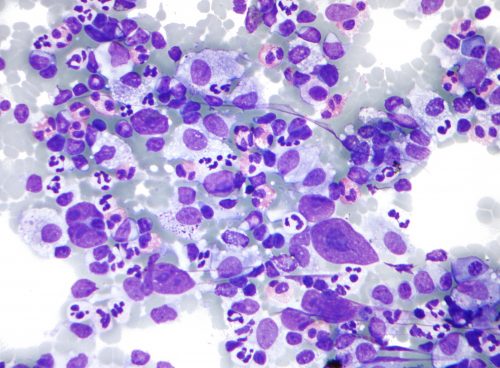 After going through leukemias, we will discuss lymphomas.

Somehow, it can get quite overwhelming when figuring out the differences between lymphomas, leukemias, and myelomas. Yes, it’s confusing, but the significant difference is their origin or where cancer started.

In all types of leukemia – whether acute myelogenous, chronic myelogenous, acute lymphocytic, or chronic lymphocytic – they have the same clinical manifestation which is increased production of white blood cells that crowd out red blood cells. The hemoglobin and hematocrit will drop, including the platelets. Technically, the only difference is where cancer originated.

For leukemia, the conditions start in the myeloid and lymphoid stem cells. As for lymphomas, they begin in the B-cells and T-cells.

As a quick recap, cells are made initially in the blood stem which is either the lymphoid or myeloid cell. Then, it becomes lymphoblast cell that then produces the T-cells and B-cells. So, this is how cells progress and where lymphomas come to life.

Your clients will start developing prominent lymph nodes, pain in the spleen, and swollen tonsils. The signs and symptoms of lymphomas will either be painless or non-symptomatic. Lymphomas usually happen with clients aged 20 to 30 years old.

There are four main stages of lymph node enlargement:

Remember, lymph nodes are the body’s agents for sucking up anything from the blood to be pushed out of the system. Lymph nodes are activated and become swollen when people get sick; it is the body’s defense mechanism against illnesses.

A biopsy is done to determine if the lymphoma is with or without Reed-Sternberg cells. Once these cells show up, it’s an automatic Hodgkin’s lymphoma. On the other hand, there will be no immediate diagnosis if the results show negative for non-Hodgkin’s lymphoma.

Lymphomas are idiopathic; meaning, the cause of the illness is not known. What we do know are the clinical manifestations but not the leading reasons why lymphomas happen. Currently, medical experts are still figuring out how lymphomas begin, but until such time, lymphomas are considered idiopathic.

Scientists, however, think that there are a few predisposing factors of why lymphomas occur, namely:

So, unlike other diseases like that of liver cirrhosis wherein you know that the client might have been an alcoholic, lymphomas are more complicated.

With chemotherapy, it’s like hitting the restart button by killing off the cancer cells.

On our next discussion, we’ll be focusing on myelomas. You can visit SimpleNursing.com for more nursing resources.