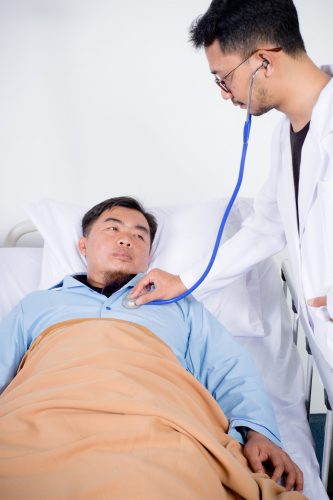 Before going into details on how to efficiently diagnose acute respiratory distress syndrome (ARDS), we’ll have a quick overview and some signs and symptoms.

Acute respiratory distress syndrome (ARDS) develops due to the building up of fluids inside the alveoli or the microscopic, elastic sacs of air inside the lungs. This build-up of fluid will prevent or make it difficult for the lungs to be filled in with air, resulting in limited oxygen reaching the bloodstream. Decreased oxygen in the body compromises the entire system from working properly.

ARDS usually happens to people who are severely ill or those who have experienced critical injuries. As for those who already have ARDS, most of them do not survive, and the risk of mortality increases with the illness’ severity and age. As for those who do survive, they either have irreversible lung damage or will recover completely.

The manifestations of ARDS change with intensity, and will significantly depend on the illness’ severity and cause; not to mention the presence of an underlying lung or heart disease. Some of the common signs and symptoms of ARDS are:

How do we diagnose ARDS? How does one say that the patient needs to be taken to the ICU as soon as possible? Here are the main criteria to accurately diagnose ARDS in a patient:

One of the main criteria for diagnosing ARDS is the inconsistency in breathing patterns since the lungs are primarily affected.

If a post-operative patient’s oxygen saturation has been steadily below 90% Sa02, it is one of the main indicators for ARDS.

The doctor will also order out an ABG test to see how much PaO2 or oxygen is going back to the pulmonary artery. If the result is anything less than 60%, that’s another criterion for ARDS.

If the pH result is less than 7.30, this means that the blood’s acidity is high and will immediately affect the lungs.

To summarize, here are the things that healthcare practitioners should watch out for when trying to diagnose ARDS:

Aside from distressed breathing, if the results show the indicators mentioned above, all it means is that the lungs are filling up with carbon di-acid or carbon dioxide, which makes it hard for the patient to breathe.

While oxygen is not going inside the lungs and to the rest of the body, carbon dioxide is building up. Therefore, it is expected that carbon dioxide can go as high as 50mEq/L. This will cause the blood to become very acidic.

So, now that we are well aware of how acute respiratory distress syndrome is diagnosed, we will now proceed to the stages based on the severity of the illness; all this and more in our next article.