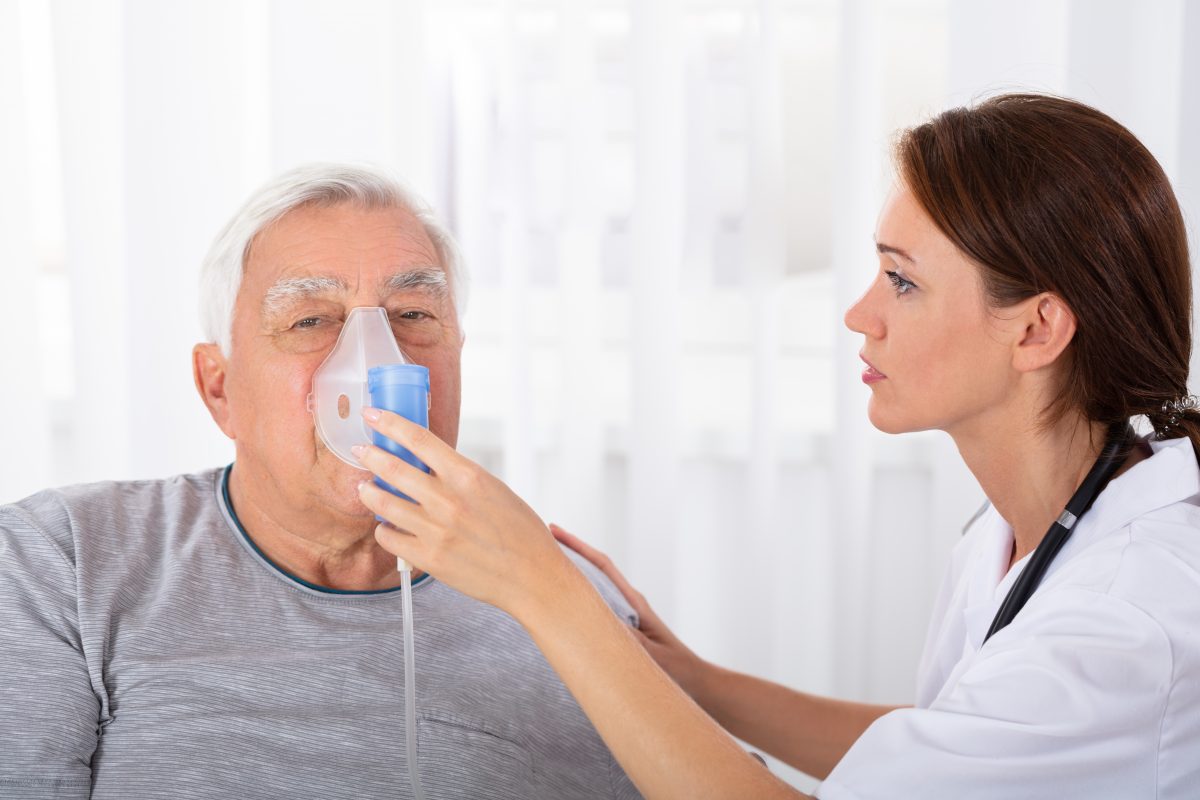 Chronic obstructive pulmonary disease (COPD), refers to a group of diseases that cause airflow blockage and breathing-related problems. It includes emphysema and chronic bronchitis. It’s associated with structural lung changes due to chronic inflammation from prolonged exposure to noxious particles or gases, most commonly cigarette smoke.

Chronic inflammation causes airway narrowing and decreased lung recoil. The inflammatory response and obstruction of the airways cause a decrease in the forced expiratory volume, and tissue destruction leads to airflow limitation and impaired gas exchange.

Hyperinflation of the lungs is often seen in imaging studies and occurs due to air trapping from airway collapse during exhalation. The inability to exhale fully also causes elevations in carbon dioxide (CO2) levels. COPD often gets worse over time if it’s untreated.

Emphysema is a condition involving damage to the walls of the air sacs (alveoli) of the lung. When emphysema develops, the alveoli cannot support the bronchial tubes. As a result, the tubes collapse and cause an obstruction, which traps air inside the lungs.

Too much air trapped in the lungs can give some clients a barrel-chested appearance. Also, because there are fewer alveoli, less oxygen can move into the bloodstream. Lung elasticity and the loss of surfactant decrease the ability of the lung tissue to recoil and results in air trapping.

Chronic bronchitis is thought to be caused by overproduction and hypersecretion of mucus by goblet cells. Epithelial cells lining the airway respond to toxic, infectious stimuli by releasing inflammatory mediators. As a result, this leads to airflow impediment because of obstruction to small airways.

The airways become clogged by debris, and this further increases the irritation. The characteristic cough of bronchitis is caused by the abundant secretion of mucus in chronic bronchitis.

To diagnose COPD, a thorough history and physical will need to be completed. The history will include questions about current and past symptoms and environmental factors that could cause the disease. You’ll also ask about any family history of respiratory diseases, smoking history, and other risk factors that may contribute to the onset of COPD.

Assessment is key in trying to confirm the diagnosis of COPD. First, a physical exam will need to be performed, including auscultating the lungs, observing breathing patterns, and obtaining vital signs, including pulse oximetry. Then, the health care provider (HCP) may order multiple diagnostic tests such as x-rays, sputum samples, CT, arterial blood gas (ABGs), or use a scope to visualize the lungs.

There are many ways nursing interventions can help COPD clients deal with their condition and live as full a life as possible. The first step is to differentiate which type of COPD the client is experiencing.

Chronic bronchitis: This is characterized by inflammation in the mucous membrane of the airways and chronic cough that produces mucus. It may also involve sputum production and wheezing. Acute bronchitis consists of an infection in the airway lining, which may last up to three weeks before resolving on its own.

Emphysema: Emphysema occurs when there is permanent damage to alveoli (air sacs), causing them to lose elasticity and shrink over time from lack of oxygen exchange between alveoli and blood.

While there’s no cure for COPD, there are many things you can do to help manage your client’s symptoms. Here are some of the most effective nursing actions for COPD:

Here are some COPD questions that might show up on the NCLEX:

Choose one of the four:

A. Provide ambulating assistance as an intervention for activity intolerance related to fatigue and dyspnea.

B. Allow the client to verbalize feelings as an intervention for anxiety related to dyspnea and life changes.

D. Assist the client into a tripod position as an intervention for impaired gas exchange related to ventilatory muscle fatigue.

Choose one of the four:

A. Request a prescription for oral lidocaine from the client’s practitioner.

B. Instruct the client to rinse the mouth and spit after each dose.

C. Encourage the client to brush their teeth twice daily.

D. Perform a nutritional assessment for the client.

Answer: B. Beclomethasone is a glucocorticoid inhaler used to treat and prevent COPD exacerbations. The client should be taught to rinse and spit after using this inhaler to help prevent oropharyngeal candidiasis.